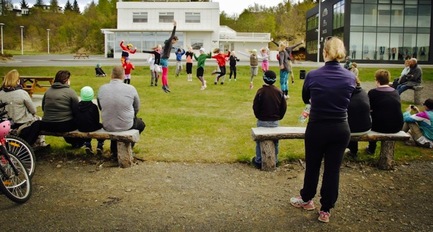 Thank you for dancing with us in Egilsstaðir. 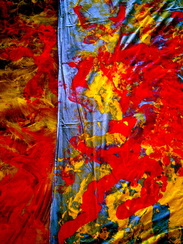 Here are our tour dates:

April 2014
Raven is preparing for the great SHÄR tour all around Iceland. The beautiful Farm of Fljótstunga is hosting the group for a week preparation residency. We are experimenting with colours and fun activities.

Raven is preparing the SHÄR-tour in Iceland spring/summer 2014, which will happen around the Island. Preparation meeting in Sweden and we are getting closer.

Raven is yet again spreading SHÄR. Now in Norrköping, Sweden, to perform EVRÍVÄR in Linden Köpcentrum. The piece is part of the exhibition Med Staden Som Scen arranged by Norrköping Konstmuseum.

SHÄR in Norrköping and Trondheim

SHÄR is happening in Norrköping, Sweden, and Trondheim, Norway, where the piece EVRÍVÄR is being performed in festival, shopping centres, squares, parks, and art museums. On the picture - MÚVÍ in the making! Fun times. 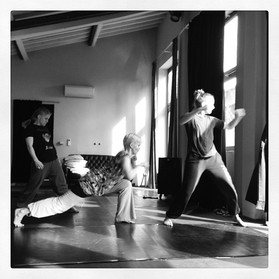 Raven collaborates with Blauba and Svikor in the project SHÄR. Right now we are in residency at Il Viviao del Malcantone, Florence. We will be working on our piece EVRÍVÄR and try out our workshop MÚV and have open classes and a lot of more fun things. 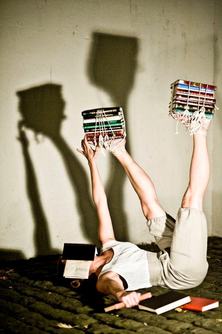 The Winter Festival of Reykjavik (Vetrarhátíðin) is getting closer and Raven will be setting up the installation, Something the Place suggested. We highly reccomend that you put it into your schedule, to stop by where rainbow coloured books and Friday beat will dominate. The piece is inspired by what the space suggests. The space is broken up to change the ideas we have about the place.

Location: Borgarbókasafnið Tryggvagötu
Time: Friday the 8th of February at 23:00

Something the Place Suggested in Florence 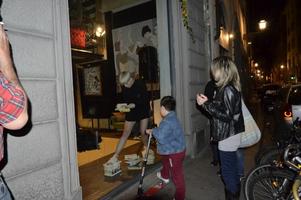 Something the place and suggested, a moving installation that reveals a glimpse of the "great life", which is the body language of the two dancers. The presence of the two characters inside the place creates a dreamlike atmosphere and gives the viewer a free imagination. 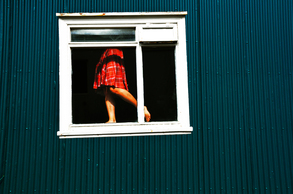 The work is predominantly influenced by the space, which has been used as a tool to create a series of characters and situations. These characters exist portraying different aspects of this space. Their physicality is a reaction to something that the space has suggested to them. The space offers many limited view points so they make movement specific to these limitations.

“Out of our hands” Dance and sound piece by Raven, Blauba and Heima
Performed 17th and 18th of June. 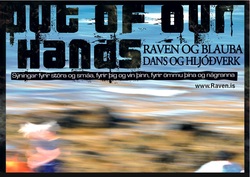 This project is the first part of a collaboration between the Icelandic group Raven, the Swedish group Blauba, the musician Medeleine Jonsson and the band HEIMA. The groups have been working together in Iceland in June, this project was initiated by the friend city connection between Kópavogur and Norrköping but the groups are also cooperating with Reykjavík Dance Atelier and Klassíski Listdansskólinn.

The Piece is 15 min for 8 dancers with life music, created for untraditional space and the emphasis is on bringing the dance and art closer to the public, therefore we have chosen to performe the piece out side in public spaces. We will also have a sharing in Reykjavik Dance Atelier where we will have open discussions about the project in the end. This brand new piece will premiere on the 17th of June in Kópavogur and Reykjavík.

We will continou with this project in Norrköping Sweden in the summer of 2012. And later we will bring the project to Norway.

June 2011
The dance group Raven and the Swedish group Blauba are working in Iceland in June on a collaboration calledf ´Out of our Hands´ , but the project will continou next summer in Norrköping, Sweden. In a connection to the project the group will offer an open workshop to the public where the participants will be introduced to the groups working methods in a collaboration with musicians.

The workshop starts with a dance class lead by Sofia ´Sosso´Harryson and in the second half we look into putting movement together and creating little choreography. 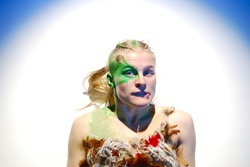 Sofia “Sosso” Harryson, originally from Norrköping, Sweden studied in London at Laban and graduated in 2009. Sofia is a founding member and initiator of the Swedish based stage art collective Blauba funded in 2008. She has worked with Freddie Opoku-Addaie and Jorge Cresis at the Royal Opera House London in their summer collection, Shobana Jeyasingh London, Christina Tingskog Sweden and Peter Svenzons company Art of Spectra in Gothenburg. She will contracted at the Gothenburg Opera from July this summer. With Blauba she has choregraphed, performed and been project manager. She is  currently in Iceland to work with a Raven Arts and Blauba collaborative performance.

I’m interested in dynamic changes, large fluent positions, speed, travels and jumps. Thus the class builds on modern and contemporary techniques. It aims to get the dancers on their legs, sooth into the floor, strengthen the whole body, fly across the space and jump as high and drop as low you can go. 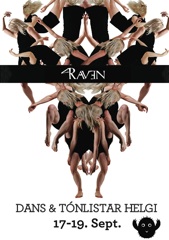 The weekend everyone has been waiting for is finally here! During
three days the dancers of Raven Productions and the musicians of ATOS
(jazz trio) will be presenting works developed by different artists
within the group from the past year. During August and September the
dancers and musicians have been gathered in Reykjavík to develop
Hulda - falið verkefni and will now premiere the piece.

after the rain, I saw you
Hliðarspor
Are you going somewhere
they Met, they Loved, and Flew away
This is how
Body, Building
You
Waste more, want more
NEI

Workshop 11th and 12th of September 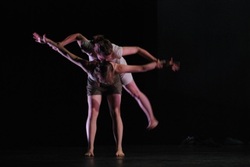 The dancers of Raven Productions (Iceland, Hungary, Sweden, Italy, and UK) and the musicians of ATOS (Argentina, Germany and Portugal) are gathered in Reykjavík, Iceland, during August and September to create Hulda - Falið Verkefni. This is an opportunity to take part of their working methods and get an insight in the creation of their new piece. The workhop will be accompanied live by the musicians of ATOS. 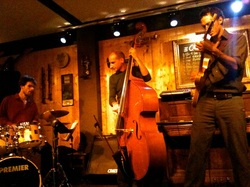 ATOS is a jazz trio consisting of Gonçalo Almeida on bass (PRT), Wieland Möeller on drums (GER), and Lucas Acuña on guitar (ARG). The trio is based in Netherlands, but now located in Reykjavík, Iceland, to play at Café Rosenberg and collaborate with Raven for the commencing performances in September.
Check them out at myspace.com/atostrio

After the rain I saw you at Reykjavík Dancefestival 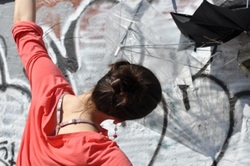 The dancefilm "after the rain, I saw you" by Hrafnhildur Einarsdóttir will be shown at Reykjavík Dancefestival in Hafnarhúsið- Reykjavík Art Museum.

The film will also be shown at Hafnarhúsið in the opening hours of the museum during the festival 2-5 of september.

Surrounded by broken umbrellas and colors that had been hunting us, we started our performance, suddenly we became aware of every detail in our surrounding. We all shared a common feeling, being watched.

A NYC street artist, Joe Magrum, came to my mind. I´m not used to be creating my art in front of strangers, which he does all the time. I´m used to presenting my work when I have worked on it secretly for a while in a safe studio environment with only my collaborators close to me. When I finally present my work, I do it in a safe, dark place, wearing costumes and plenty of make up.

Are we so scared of strangers and what they might think? Why do we normally look away when we accidentally meet a strangers eye. 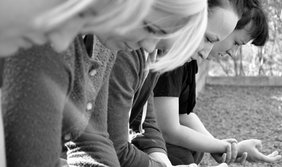 The group will be performing two works at Culture Night, Reykjavík, Saturday 21. August. The work NEI by Hrafnhildur Einarsdóttir, which was presented at Jónsvaka festival in June, and the work Hliðarspor which is a collaborative work by the dancers Anna Axiotis, Brogan Davison, Clara Folenius, Ellen Harpa Kristinsdóttir, Eszter Göncz and Hrafnhildur Einarsdóttir.
Hliðarspor

When one is walking down the main street, it is hard to avoid meeting familiar faces. How do you react?
Looking at daily life circumstances and behavior down town Reykjavík. The group will be traveling between places, performing the work in different surroundings.

NEI will be performed at Gallerí Crymo, Laugavegur 41a at 14:00 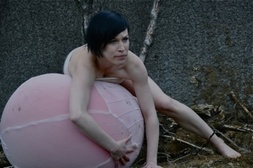 Raven’s dancer Eszter Göncz will be performing at Jónsvaka Art Festival in Reykjavík, 26th of June with our newest project NEI. NEI is a work in progress, choreographed as a duet- result: Solo.

Connections between places, thoughts and action which two people have been through together. Like a relationship that has gone through many break ups, but lived through it all.


Why do people think it is safer to say no to challange?

Do people enjoy the reflections of their lifes

Are people scared of understanding ?

Raven has been invited to Abundance International dance festival In Karlstad, Sweden 15th -18th of June 2010, with the work Hrefna, choreographed and performed by Hrafnhildur Einarsdottir.

Raven has been exploring the city of New York for the last two months. Meanwhile working on a short film in collaboration with performers Irene Cena and Wiebke Schuster. The rehearsals and the shooting of the film is now finished and the audio-visual editing has begun. Keep visiting raven.is to see excerpts and more about the development of the short film in the forthcoming weeks.