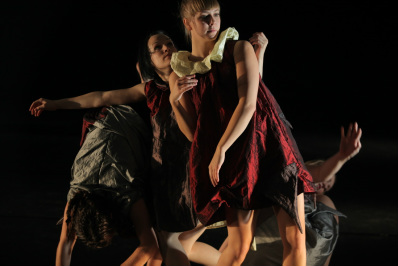 Raven is an independent dance collective based in Reykjavík, Iceland. The aim of Raven is to work collaboratively with artists from different fields, connecting art forms and creating eclectic works. The group was founded in London 2008 by Hrafnhildur together with Anna Axiotis, Clara Folenius from Sweden, Ellen Harpa Kristinsdóttir from Iceland and Eszter Göncz from Hungary. Later Martina Francone from Italy joined the group.

Working with a diverse group of people from around the world is key to the influences and development of Raven’s work. The group researches and explores often with improvisation, both inside and especially outside the studio in their working processes. Raven has shown its work in Iceland, England, Sweden and Mexico. The group tour around Iceland and abroad building a network with artists from all over the world.